Showing posts from December, 2012
Show all

Pondering the Pertinence of Politics 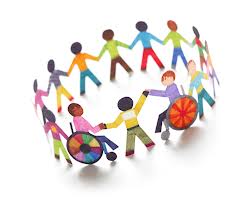 As a sociologist specializing in social inequalities, I constantly ponder the politics of representation in my writing. For whom am I empowered or entitled to speak? I’m committed to representing a world that looks a lot like the one in which I live. To that end, I want to feature in my stories women and men of color, non-straight folks, people of differing appearances and body sizes, and individuals with varying abilities, but can I? Should I?
Because of all this, my current literary project is kicking my booty. For some reason that I’m pretty sure borders on masochism, I decided this summer to pen a science fiction/fantasy/romance novel that focuses on the interactions of my world’s social outcasts, who just happen to be people with disabilities. I’m 40 thousand words into my novel, and although I’m in profound love with my characters, I also write the words with a burden of deep unease.
Earlier this week, I ran across a powerful blog entry that emphasized the responsibility of auth…
Post a Comment
Read more

It's Not Only Vamps Who Need Blood LOVE VAMPIRES? WANT TO BE A LIFE-SAVING SUPER-S/HERO? DESPERATE TO FEEL SMUG ABOUT SAID LIFESAVING? LIKE TO ACCESSORIZE WITH PRETTY COLORS?
Then do I have a proposition for you: DONATE BLOOD. Seriously. Donating blood turns ordinary folks into life-saving super-s/heroes, it takes as little as a half-hour, and there’s just something so gothalicious about saving lives while watching the red stuff flow.
Vampire lovers of the world, let’s be honest: A human walking toward us with a syringe in their hand and a gleam in their eyes is the closest we will ever really come to the erotic, soul-stealing kiss of a vampire. Grab it while you can. And hey, I have it on good authority that donating blood hurts a lot less than having two humanoid fangs pierce your jugular.
Plus, donating blood also earns you the coolest accessory known to modern civilization: the colored bandage. Let’s take me, for example. I happen to super-duper like pink. (Think, like, eight-year-old, middle-class White girl with a pe…
Post a Comment
Read more
More posts